Completed by Nick Tran
The Mission: Explore the connections between the four spheres and human impact and how that affects the world and Algonquin

Early in the semester, I got the chance to go on a camping trip in Algonquin park for a of couple days, and encounter things much different from what I am used to living in the suburbs. The main focus of the trip was to explore and experience the connections between the four spheres (atmosphere, biosphere, hydrosphere, and lithosphere), human impact, and how that has affected the environment. For example, the shape of land affects weather patterns, and in turn, dictates climate of that region, and because of the certain climate, this determines what organisms thrive. From beaver dams to Andromeda, the closest galaxy to us outside of the milky way, I got to experience many different things. When we returned from the trip every person had to write a research report roughly 30 pages showcasing these connections and their impacts. If you would like to read the full report, it will be linked below, but this page will be a little summary of everything. All resources used to find my information can be found in the actual report linked below.

What Are the Spheres? 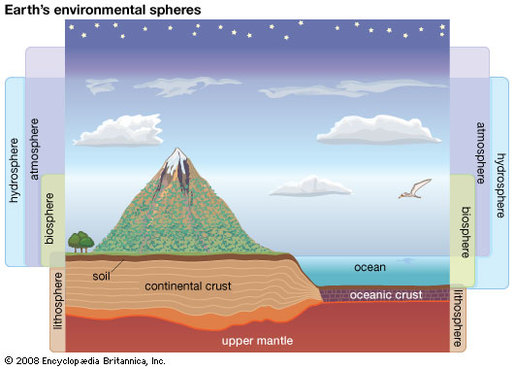 Image Credit to Encyclopedia Britannica
The Earth is made up from four main parts, or "Spheres"; the atmosphere (air), hydrosphere (water), biosphere (living organisms) and lithosphere (land). Each of these spheres are a layer that completely surrounds the Earth, and each sphere will often have their own set of cycles and layers. Each of these layers work together to form each sphere, and these spheres work together to form the Earth and its environment that humans are so familiar with. Since these four spheres are so deeply connected with each other, changes to one sphere will affect the other spheres. The spheres are deeply intertwined, interacting and affecting each other in a variety of ways.
These four spheres all interact with each other to create the world that we live in , but more specifically, in Algonquin park. Different factors have affected the park, and as a result, have created completely different environments and ecosystems, inside and outside the park. From acid rain to glacial outwash, or erosion, all of the spheres have played a part in shaping Algonquin park to the way that it is today, and have made it possible to support the unique variety of wildlife that live there.

In the atmosphere, nitrogen, carbon dioxide, and oxygen are a large part of the atmosphere. In fact, nitrogen makes up 78% of the atmosphere, oxygen 21%, and carbon dioxide making up around 0.04%. These gases are essential for life on earth. They cycle through all four spheres of the earth, supporting life.
Nitrogen is the most abundant element in our atmosphere, however, in its gaseous form that nitrogen is unusable to most organisms. The process of turning this nitrogen into a usuable form is called "Nitrogen Fixation", and it is performed by nitrogen fixing bacteria and certaom algae. The result of nitrogen fixation produces ammonium, which is then taken by nitrifying bacteria, producing nitrates, which is a form of nitrogen that organisms can use. From there the nitrates are absorbed by plants and animals through soil to be used to make proteins and other nitrogen-based compounds. If these plants are then consumed by other organisms, it passes on that nitrogen to those organisms, fueling the food chain. Finally, when a plant or animal dies, it decomposes, turning back into ammonium in the soil, which can then be turned back into nitrates, which can then be used by plants again. However, denitrifying bacteria can also take those nitrates and turn it back into gaseous atmospheric nitrogen, releasing nitrogen back into the atmosphere, completing the nitrogen cycle.
In Algonquin park, these nitrogen fixing bacteria also live symbiotically with a certain plant; the speckled alder. Instead of releasing the fixed nitrogen into the soil, it is provided directly to these plants. As a result of this unique relationship, the alder is able to succeed in relatively nutrient poor conditions, and its impacts are much wider felt than just that. Because the fixed nitrogen is so much more readily available, the leaves of the speckled alder are four times richer in nitrogen. When these nitrogen rich leaves fall into streams and waterways, they are food to insect larvae, which in turn are food for minnows and insect that feed larger fish, birds, and other organisms. The unique relationship between these plants and nitrogen fixing bacteria fuels the aquatic food chain of Algonquin. In addition, when these leaves fall onto soil, the result is similar. The nitrogen rich leaves help to fertilize the soil, which promotes better plant growth, that is able to support more life and organisms. This speckled alder is crucial to much of Algonquin park.

Beaver Meadows showcase the unique effect beavers have on the environment, even once they have left the area
Beavers are one of the many unique creatures that Algonquin park is home to. They are a unique animal, because, instead of adapting or moving places to suit their needs based on the environment, they change the environment to suit their needs. They are the only animal that does this other than us; humans. They create unique ecosystems that wouldn't be here without them. In fact, Algonquin park may not have even been established if it wasn't for the beaver. Beavers live in beaver ponds, and the process of creating this unique ecosystem starts with a small stream or creek running through a forest.
Beavers will cut down trees in the surrounding area and form a dam, flooding the area, and killing any other trees in the immediate vicinity. This creates the shallow beaver pond that they live in. It is a safe haven, protecting them from predators and other threats. Not only that, it creates a safe haven for other animals to feed and live that wouldn't be able to live here otherwise. Water lilies grow, not only supporting the beavers, but also dragonflies and frogs that feed and make their habitat there. The pond provides food and a habitat to great blue herons, mosquitos, and hundreds of other organisms. In addition, the mosquito larvae that live here feed moose and ring-necked ducks that also eat aquatic insects. However, this safe haven eventually must come to an end, as beavers will leave the area. They eat all available food faster than it is replenished, and with no food, they are forced to move. Over time, the dam they built will collapse, water levels will drop, which exposes the mud that was used to create the dam. Grasses and sedges colonize the mud, and a beaver meadow is formed. Even if  beavers no longer make their home in the area, their actions can still be felt. This beaver meadow supports other forms of life, such as the meadow jumping mouse, as well as frogs and snake. In addition, with the meadow free of trees, it provides a clear view for broad-winged haks, making it a perfect hunting ground. Beavers are extremely influential and unique creatures, creating habitats that are not found anywhere else, and those habitats continue to have lasting effects long past when beavers have inhabited the area.